According to Blacktower Financial Management, Spain is one of the best European countries for retirees based on living costs, crime rates, life expectancy, property prices and population age.

Spain has beautiful surroundings, towns, cities, and 300 days of sunshine, which makes it a perfect setting for those wishing to retire here. That is why Valencia, Alicante and Malaga were elected as the best coastal areas to relocate in Spain. Stay with us, we will tell you all about it!

Valencia is Spain’s third-largest city after Madrid and Barcelona, and it also accounts for being one of the most visited cities by tourists worldwide. Valencia is well known internationally for its thriving culture, its cuisine, traditions and for being a remarkable city.

It was here that the famous traditional Spanish dish paella was brought to our taste, too! Apart from that, the city is internationally known for  Las Fallas, a local festival that celebrates the start of spring by burning artistic monuments.

While Valencia’s rich culture and traditions are attractive to the tourists, the quality of life, living costs and the friendly environment are also attractive factors for people who want to relocate in Spain.

The reason why Valencia is one of the best places for you to retire in is mainly due to the low living costs, having one of the best healthcare systems in the world and low property prices compared to both Madrid and Barcelona. You get to enjoy the rewards of spending the rest of your life near this coastal town, which is friendly, peaceful, and rich both culturally and historically.

Want to know where else you can enjoy a peaceful retirement with a great quality of life? Consider Portugal here.

Valencia is also popular for being the city of arts and science and for having interactive museums. You can also find several sandy beaches, which are one of a kind whether you want to dive into the waters of La Malvarrosa beach or the El Saler beach, both being a perfect hotspot for an amazing beach day!

A recommendation here would be to learn Castilian, as it’s the most spoken language in Spain, and by the locals as well, as this would be more helpful if you wish to explore other regions of Spain while living there. There is a wide availability of private Spanish lessons in the city, and you will also find that the locals are very friendly and encouraging people.

Another great advantage of retiring in Valencia is that transportation is easy to use, enabling you to easily get from one place to another. The city offers The Valencia Metro which covers the city area and is the most used by the locals. It also has both overground and underground trams. The metro system is divided into different colour lines which are connected throughout the city including the airport and main stations. If you prefer to walk or cycle, then that is also possible as Valencia is bike-friendly, and you can walk around the city of Valencia and reach nearby places within minutes of walking.

Alicante is known for being a contemporary city full of warm summers and dry winters. It is a region that hugs you with a warm, friendly, and welcoming feeling.

English language is more commonly spoken in this area of Spain as it is resided by many Northern Europeans, mostly British expats, mainly in the areas of Denia and Xavia. Due to this, you can also find many English-speaking schools as well. It is said that at least 15% of the population living in the Alicante area is foreign, so if you are looking for diversity then this is the place for you!

Although tourism is a big part of this city, property prices and transport prices remain quite affordable for both tourists and people who seek to retire here.

Alicante is a perfect spot for you to retire because the area not only contains attractive beaches but also plenty of traditional cafes and restaurants that serve classic Spanish food.

If you are health conscious then Alicante has also been pointed as one of the healthiest places to spend your life in thanks to the lifestyle, the Mediterranean diet which mostly incorporates fresh local food, the weather, friendly environment and also a great healthcare system!

Make sure to check out our available properties in Alicante here.

This region also offers many travelling options, from public transports to electric trams which not only covers the inner-city area, but it also links to the surrounding cities including Barcelona (around 5 hours away), Madrid (2.5 hours away) and Valencia (1 hour away). It can be said that Alicante is a busy city during the summer holidays, but apart from that, you find the roads of the town very clean and calm.

This city has certainly a lot to offer to everyone, from warm beautiful beaches to astonishing mountains and outdoor activities to keep yourself fit and active as well as experiencing and enjoying new hobbies. Not to mention its inspiring museums and castles full of history. If you enjoy parties, make sure to attend the “fiestas” from Moros i Christians in Altozano and San Blas district to the Bonfires of Saint John during summer.

Malaga is situated on the Costa del Sol of the Mediterranean, a southern part of Spain. This region of Spain is popular for being the birthplace of the world-famous Pablo Picasso! Here you can enjoy some yellow-sand beaches, the famous tapas, the San Miguel beer, and the fantastic Mediterranean weather.

If you’re a foodie, head to the local food market of Atarazana! Here you will find that espetos are a local speciality, as well as grilled sea-food, especially fish and sardines.

Just like Alicante, the transport system in Malaga is also very accessible. Buses and taxis are also readily available. It also has links to the rest of the country and Europe as well, which allows you to visit and explore not only your surrounding areas but also the neighbouring countries.

Malaga also has special space and attention towards body wellness and relaxing treatments such as Arabic thermal baths, which are used for relaxing and calming your body and mind.

Besides this relaxing and chilled-out lifestyle, you can also practice sports, such as golf, hiking and trekking. Malaga also carries one of the best ski resorts in Europe, so you can enjoy the coldest months in the Sierra Nevada ski resort!

Malaga’s private health system has also been recommended by the retired pensioners that live there, as they are able to provide private insurances, and other facilities in different languages. Both the national and private health care systems are well known for its well developed and well-functioning systems, too. 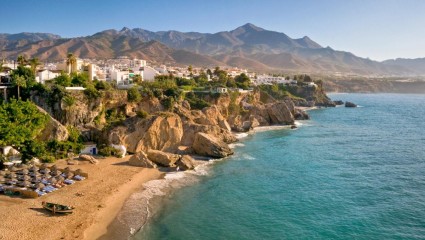 Costa Del Sol - A Proof Of Mediterranean Grace
Málaga is known for being the capital of Costa del Sol. We are talking…