Life in Valencia is full of unexpected surprises. Being one of the most popular cities for visitors in the whole of Spain, Valencia has a great blend of ancient sights and modern attractions. It's known as the City of Arts and Sciences, with futuristic structures including a planetarium, an oceanarium and an interactive museum. Valencia also has several beaches, including some within nearby Albufera Park, a wetlands reserve with a lake and walking trail and you can be at the beach within 20-30 minutes, either on a bike or via tram. Valencia is where the Turia River meets the Mediterranean Sea where waters are calm but also enable you to surf and kite-surf at certain times.

Valencia is a great spot for outside sports, perfect for cyclists, as well as hikers and rock climbers. It is a good place for runners too.

Paella is, of course, the favourite dish here, given that this dish originates from nearby Albufera National Park, around half an hour south of the city. Seafood is of course on the top list as well!

Things To do in Valencia 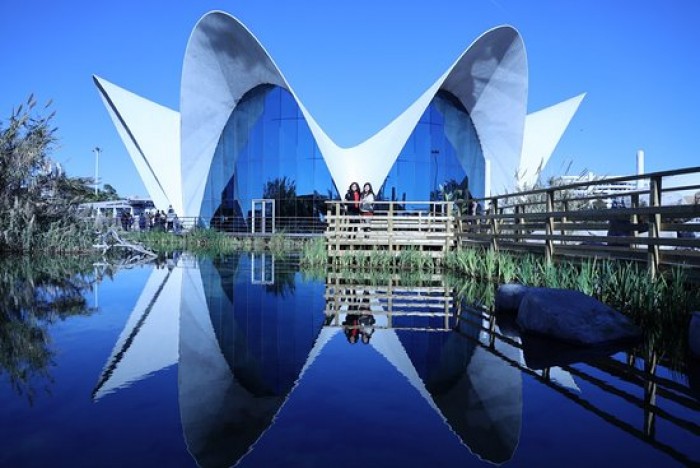 The aquarium in Valencia is organized by ten zones, each synthesizing a distinct environment, and using real seawater from Valencia's waterfront. So at the Arctic tank, you’ll get to see beluga whales swimming in a spacious and thoughtfully designed tank. You can spot sand tiger sharks, penguins, walruses, dolphins, and sea lions. 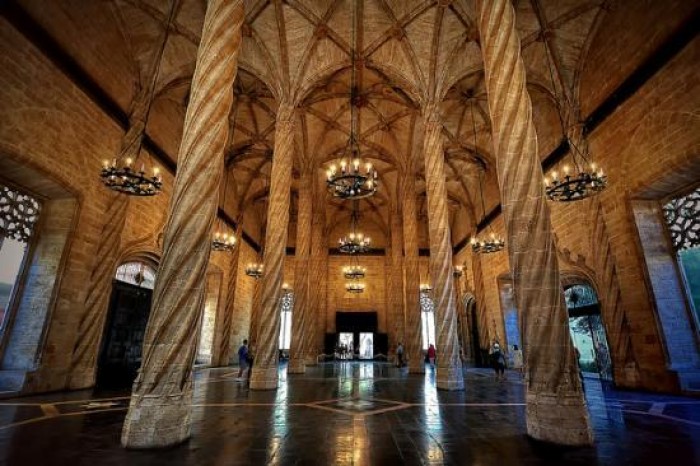 La Lonja de la Seda is the finest monument to Valencia’s golden age when the city was one of Europe’s main centres for trade and culture. Has a gothic architecture and it is a UNESCO building.

In the 15th century, trades from far away from the Mediterranean would meet and make deals. Inside you can see the amazing twisting columns of the main hall and look up at the incredible detail of the ceilings. 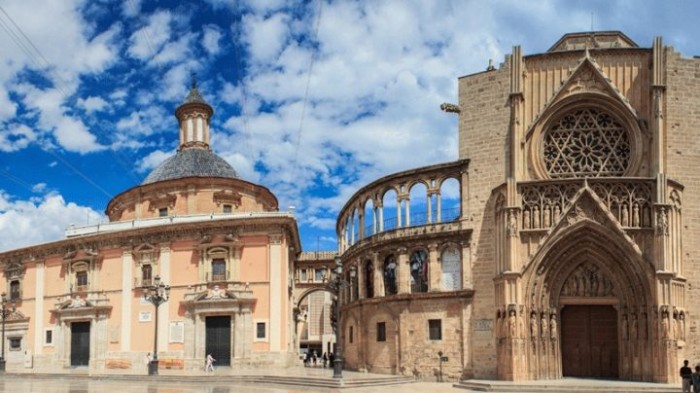 The Valencia cathedral dates to the 13th and 14th centuries, with renaissance, baroque and neoclassical architecture modifications made over the next few hundred years.  Inside the cathedral, you can see 15th-century Renaissance paintings by artists such as the Valencian, Jacomart as well as several from Rome commissioned by Pope Alexander VI. The most fascinating part is the Chapel of the Holy Chalice. At the altar is one of a few chalices claimed to have been used by Jesus to institute the Holy Eucharist at the last supper. This agate vessel has been dated by archaeologists to between the 4th century BC and 1st century AD. Since then,  no scientific analysis has been made of this affirmation yet. 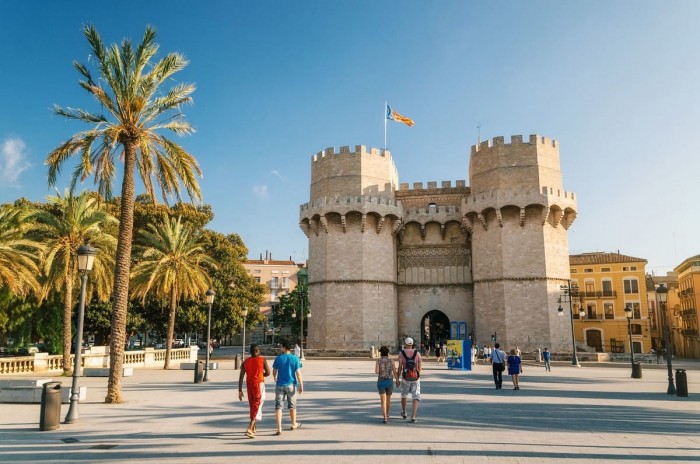 The most bohemian and youngest part of Valencia city is El Carmen which took shape in medieval times, situated outside of the 11th-century Moorish walls but within the Christian ones that went up in the 14th-century. All these palaces next to these cool, shaded alleys have been converted into hip boutiques, bars, restaurants, and nightclubs. You can also see fragments of Valencia’s late-medieval defenses, at Torres de Quart and Torres de Serranos. 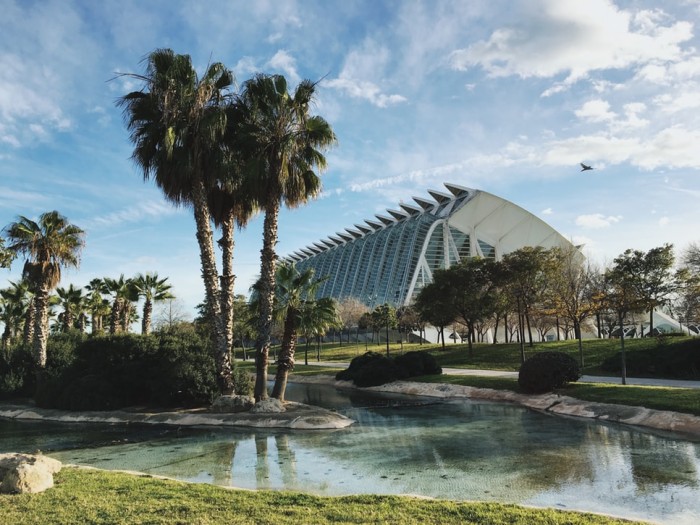 In the middle of the city of Valencia, you can find a park to bring you some relaxation and fresh air. The River Turia, in the 20th century, burst its banks causing great damage to the city. The river was diverted and in the 80s its riverbed in the city was turned into nine kilometres of verdant green space. Several landscape architects were drafted in to build these gardens, creating a scene of pine forest, orange groves, palms, and paths that lead past sports facilities, play areas and fountains.

Want to know more about Valencia

Valencia is not that huge, so the best way to explore it is on foot. Still, it might be convenient to catch a bus or a metro to get from one part of the city to another or to access the public beaches. Taxis are the most expensive means of transportation here. However, it’s always waiting for you everywhere, especially when you’re in a hurry.

The public transportation network in Valencia is extensive, buses are no exception. Day and night, over 50 routes run across the city.

Metrovalencia is clean, quiet, and also easy to use. Besides, a well-developed metro and tram system, there are six underground train lines and three tram lines operating in Valencia. The most popular lines connect the airport to the city centre. You can access the most popular shopping street in the city, Carrer de Colon.

Valencia’s climate is positively idyllic, with blue skies and sunshine to die for, even when it’s supposedly winter.

In fact, winters are so mild although you’ll certainly need a coat when the sun goes down. In January, the coldest month of the year, the average day time temperature is between 14-20ºC, and at night between 4-12ºC.

Summer in the city technically lasts for eight months of the year, from April to November although it’s not uncommon to experience temperatures of 24-28 in February and March. Valencia’s climate is classified as subtropical. During the day, the average temperature is 23 degrees and 13.8 degrees at night. In August, the hottest month, you won’t want to be far from a fan. The average temperature ranges from 28-34 degrees in the day and around 22 degrees at night. September gets a lot of rain, but often they are just quick showers that help clear the humidity.

Valencian cuisine is Mediterranean cuisine and there is an incredibly diverse cuisine. Its basic ingredients are vegetables, seafood and meat, whereas meat dishes including game, lamb, and kid goat are common in the mountain areas. Both mountain and coastal areas of Valencia can claim their stews.

Valencia is known for the high-quality and It is famous for its rice which dominates some menus, such as paella, and rice stews. Then, there are oven-baked rice dishes and soft rice dishes made in earthenware casseroles with an egg crust.

The cuisine of neighbouring regions has given and received important contributions from Valencian gastronomy, like Balearic cuisine, Catalan cuisine, Aragonese cuisine, Manchego cuisine and Murcian cuisine.

Here follow a few of our recommendations for a few fantastic dining and bar experiences in Valencia:

Valencia is famous for its beaches and that's the price of being one of the best cities in the Mediterranean coast. There are several to visit, all of which are clean, and family-friendly. The closest beaches in Valencia are just 10-20 minutes from the centre, making it easy for visitors to stay close to the city yet get to the beach with no stress.

The landscape is always amazing, and you can feel free to swim at any time! It is a relaxed spot, with golden sand, and nature is a complement to the beach. Most of them have some amenities like restaurants, bars and cafes. All the beaches have plenty to offer so here's our guide to choosing your perfect beach in Valencia:

Las Arenas Beach - Las Arenas is perfect for this vast stretch of its fine, golden sand and there is always plenty of space for everyone to relax, it’s clean, safe and relatively undeveloped. There are plenty of facilities, with sun loungers for hire, volleyball courts, toilets, a snack bar and much more, plus nearby you’ll find a promenade with dozens of cafes, bars and restaurants.

La Malvarrosa Beach - Playa de la Malvarrosa has a lovely long stretch of fine golden sand. There are all the same facilities, plus a few cafes and restaurants facing the seafront, but it also remains largely undeveloped, safe and clutter-free, it is a relaxed local feel.

Patacona Beach - Patacona Beach is slightly further out and so it’s perfect if you’re looking for a quieter spot than La Malvarosa and Las Arenas. The landscape is unspoilt and the water is clean and safe for swimming.

Valencia is one of the cities in Spain that is best renowned for its shops. Firstly, it is Spain's third-largest city, making it an important place to be located for commerce, as well as smaller independent ones. Valencia is also a city that has made lots of progress during the years, including large shopping centres. It is also a city of tradition, leaving a legacy of wonderful gift shopping opportunities. If you like shopping, you'll have a great time in València. You’ll find the main international brands in our shops, as well as creations of young designers, artisans and the best vintage clothes. Valencia has a few shopping centres:

Centro Comercial Nuevo Centro -Close to the neighbourhood El Carmen and the Turia Park you can find the shopping centre Nuevo Centro.

Valencia Airport is known as Manises Airport and is the tenth-busiest Spanish airport in terms of passengers and second in the region after Alicante. It is situated 8 km west of the city of Valencia, in Manises. The airport has flight connections to about 20 European countries.

Properties for sale in Valencia


View All Properties in Valencia

Costa Blanca is a 200-kilometre stretch of the Mediterranean, famous for its spectacular weather…
03
Dec 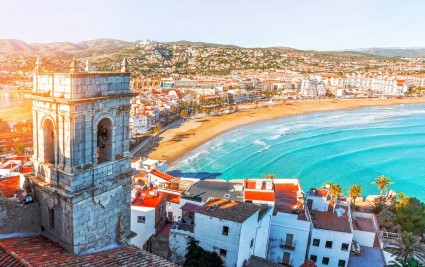 Valencia, the land of the delicious paella, is the third-largest city in Spain, giving foreigners…
15
Jul 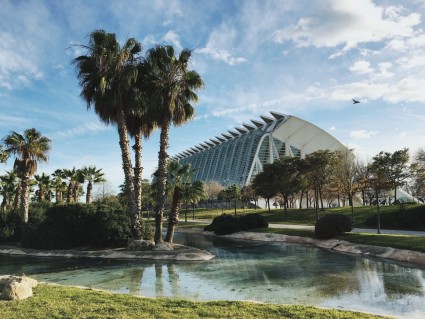 Valencia is the third biggest city in Spain, has great weather, a healthy lifestyle, cheap…
View All Spain News

Want to find out more about Valencia?