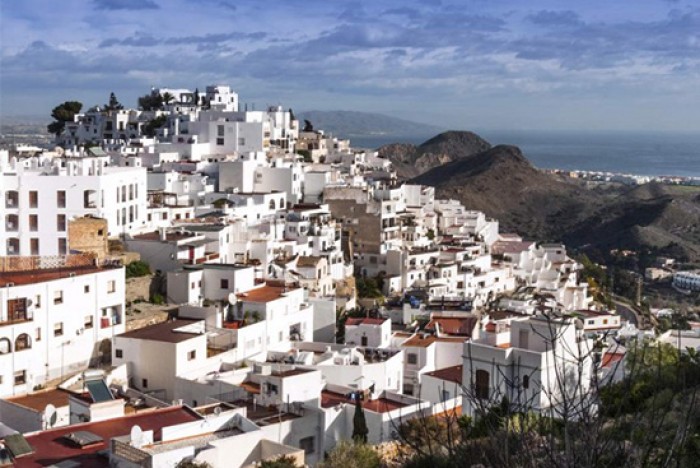 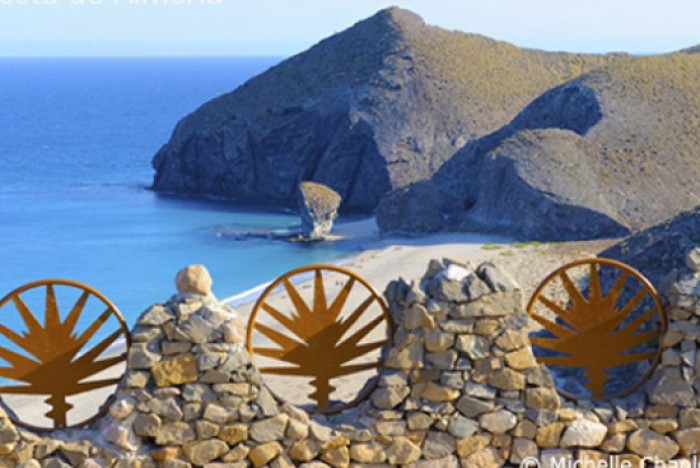 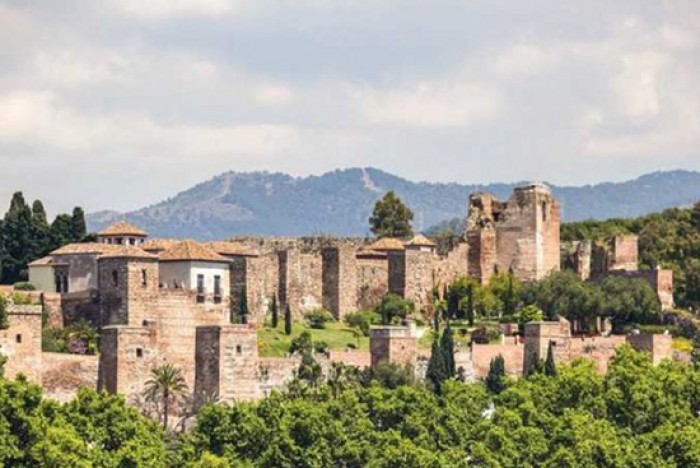 Costa de Almeria consists of the province of Almeria, in the autonomous community of Andalusia. Costa de Almeria is bathed by 217 kilometres of Mediterranean Sea and including 13 municipalities, the coast is famous for gorgeous beaches, most of which are completely unspoilt, despite their popularity. Costa de Almeria is an area of idyllic deserted beaches, rugged scenery and charming traditional towns. From sleepy hilltop towns to stylish and reserved beach resorts like Roquetas de Mar, is the perfect place for a peaceful Spanish getaway.

Things To do in Costa de Almeria 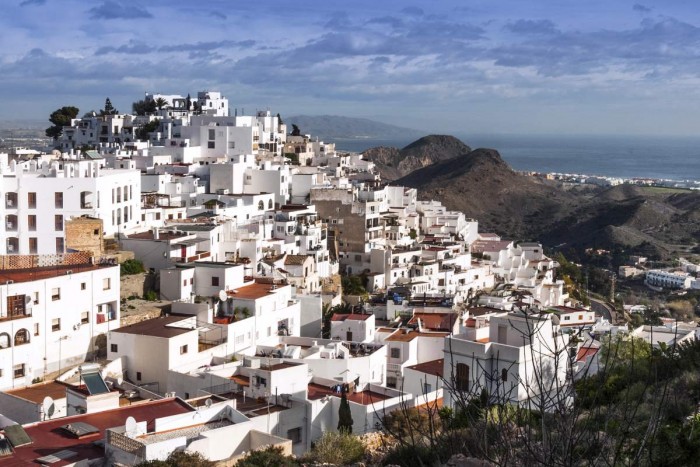 One of the most beautiful villages in Costa de Almeria, Spain, Mojácar is 90 kilometres from Almería capital towards the north. The labyrinth of streets of white houses, reminiscent of Mudéjar architecture, is one of the essential visits of the province. The town is divided into two well-differentiated urban centres Mojácar Pueblo and Mojácar Playa.

Traditionally the inhabitants of Mojácar painted on the doors of their houses the figure of the Indalo. It is for this reason that Mojácar village has traditionally been the Pueblo Indalo. The Indalo is the talisman of Almería and represents a man holding the rainbow with open arms. According to tradition, it drives away the evil eye and brings good luck to those who own it.

After an earthquake, the Cathedral was built in 1524, in style Gothic/Renaissance, the cathedral´s defensive structure consists of large plain walls with small and high windows, designed to make impossible the invasions by North African pirates. This is the country's only fortified cathedral dating from the 16th century, founded for Bishop Villalon.

The magnificent Gothic interior consists of three naves and three chapels. Its grand scale, with the ribbed ceiling and soaring arches, features neoclassical and Baroque details.

The four circular corner towers look like they belong in a castle. The cathedral shows many typically defensive features, as your ramparts and artillery loopholes.

To have a usable space for people, in front of the cathedral are plenty of tree palms to contemplate the Basilica. 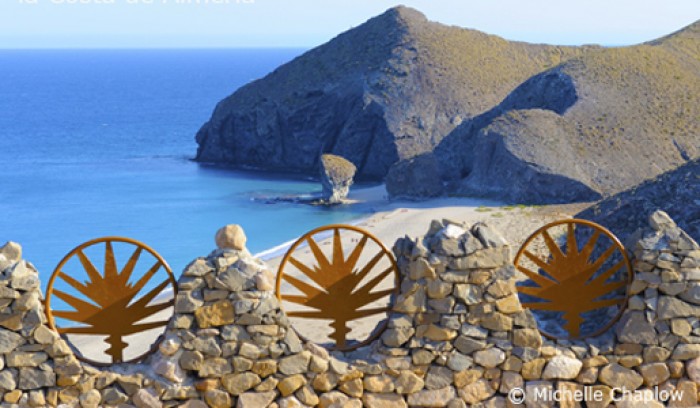 In the south-eastern end of the province of Almería, Cape Gata is located. Its coastline is marked by beaches, cliffs, and coves. Declared a Biosphere Reserve in 1997, includes the Cape Gata-Níjar Nature Park, the largest protected area on the Mediterranean coast.

A unique climate, the volcanic origin of its soil and the diversity and uniqueness of the flora and fauna that is the fruit of the contrasts that exist between the marine, coastal and land environments.

The mountain range forms coves of great beauty that give rise to fifty kilometres. Urban beaches and magnificent untouched beaches, spectacular volcanic cliffs and reefs, and ones in movement, which cause coastal spits that enclose lakes and create such attractive landscapes. The area can accommodate more than a thousand exclusive species of flora, which shows its botanical originality. You also can find species such as the pink flamingo, lots of types of birds and some variety of fauna. 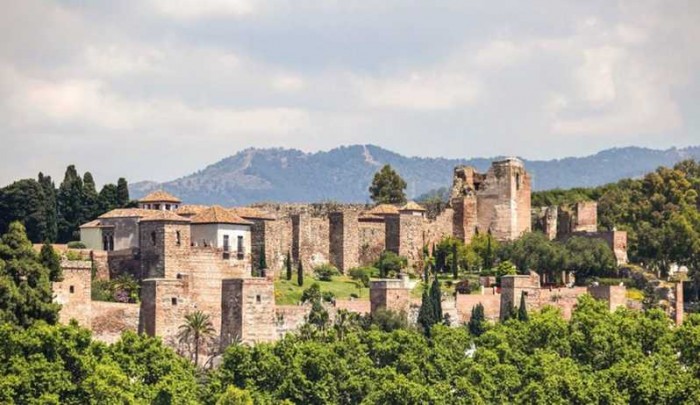 Measuring 25.000m2, this was the largest fortress built by the Moors. The hilltop Alcazaba´s walls and towers dominate the city view. Over the old tower, the view can cross the Mediterranean. It was founded during the first half of the 10th century by Cordoban Caliph Abd al-Rahman III.

The interior of the Alcazaba is divided into three walled recintos: the first two are Islamic, and the third is Christian.

After the 11th century, the King went down the hill and up the other side to the Cerro de San Cristóbal.

On the second compound, was the heart of the Alcazaba, where the Palace complex of the Caliph was located. The wall separating the first and second compounds is called the Muro de la Campana de la Vela. It's fascinating to see the décor and furniture that would have been used, as well as original ornaments. The Third recinto at the north-west end of the Alcazaba is a fortress which was added by the Catholic Monarchs and is in much better condition than the rest of the Alcazaba. 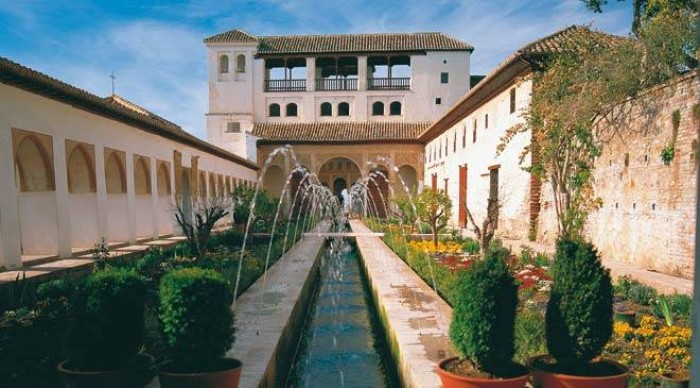 The Alhambra was called because its reddish walls in Arabic means Red Castle. It is located on a strategic point, with a view over the whole city. The complex is surrounded by ramparts and has an irregular shape. It borders the valley of the river Darro on its northern side, with the valley of al-Sabika on its southern side and with the street Cuesta del Rey Chico on the eastern side. The Cuesta del Rey Chico is also the border between the neighbourhood of the Albaicin and the gardens of the Generalife, located on top of the Hill of the Sun.

The castle of the Alhambra was added to the city's area in the 9th century, which implied that the castle became a military fortress. 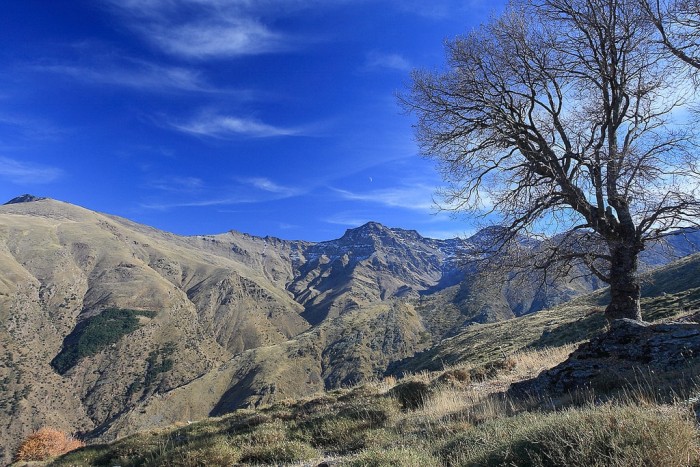 The Sierra Nevada is a dramatic, rugged and extensive mountain range, there are over 20 peaks more than 3,000m, which makes it the second-highest mountain range in Europe after the Alps and the most significant section of the Cordillera Penibética. The area encompasses torrential rivers, sheer-sided gorges, stony scree slopes, glacial lakes between snowy summits and, in the foothills of the Alpujarras, cultivated terraces of almond trees and vegetables, is agricultural produce, with cereal crops, olives, grapes, almonds, walnuts, apples and cherries cultivated

Popular activities in the region include skiing, hiking, mountain biking and summer camps. You can discover the fauna and flora with varied plants, bird, and animal species, see the lagoons and have an adventure in this vast area of land. In 1998, the Sierra Nevada National Park was declared a national park. Located in the province of Granada and Almeria, it stretches from the Alpujarra to El Marquestrado ante the Lecrin Valley, making it the largest national park in Spain, covering a total area of about 86.000 hectares. It was declared a Unesco Biosphere Reserve in 1986.

Public transport in Almeria covers the requirements of the city's many visitors and the local residents of Almeria. The main services offered are bus and taxi services.

The city bus service is good and covers all areas of Almeria with different urban lines, with regular buses every day of the week. There are other long-distance lines which offer transportation to the Almeria Airport, which is 9 km away from the city centre, as well as, the University of Almeria, and other nearby urban centres. Public transportation for travel to other municipalities, provinces and national and international destinations is situated in the Estación Intermodal de Almeria, located in Plaza de la Estacion, which also offers rail service. There is also the city's taxi service, with various taxi ranks throughout Almeria and available 24 hours a day.

The air temperature in early summer on the coast and in the center of the country is not too high but by the end of June, it is already 26°C. The water temperature at all beaches warms up to around 20°C. A truly warm sea in Spain can be found in the middle of summer, but we’re sure you know how the Mediterranea Sea feels like. The shoreline is dominated by sunny weather; the air warms up to 32°C. By the end of August, the water temperature gradually decreases. However, air like before warms up to 30°C. With the start of September, a delightful autumn season begins in Spain. The air temperature does not rise above 26°C and the sea remains warm, up to 22°C. With the onset of October, the rainy season begins in most regions of the country. In-resort places nevertheless, the swimming season lasts until mid-November. In the north by the end of October, the air temperature is already around 17°C. With the start of November, even colder weather is experienced; the weather becomes damp and windy. The average air temperature at this time is 15°C.

Costa Almeria has totally attention from travellers who love seafood dishes, gazpacho and delicious wine. Besides, seafood is also respected here and the local chefs often use shrimps, squid, anchovies, and cuttlefish. The gastronomy is world renown and all Spanish locals know the rules, about fish with oil making the dish especially fragrant. The value of a proper meal paired with the best table with friends and family. The Costa Almeria is no exception to them and neither to you. Dive into the local dishes and let yourself be blown away in the Costa Almeria. Here follow a few of our recommendations for a few fantastic dining and bar experiences in the Costa Almeria:

The beaches of Almeria can be categorised into four geographical areas. The first, the Levante, and the second, the beaches of the Natural Park of Cabo de Gata-Nijar, both areas are, without doubt, unspoilt, uncrowded and simply stunning, they are in a protected area, a place where nature is of key importance. From long sandy bays with aquamarine waters to hidden coves sheltering isolated white beaches. Traditional fishing villages, instead of high rise hotels, still line the seashores.

The third and fourth coastal regions in Costa Almeria, the Poniente, and the Bay of Almeria is home to the more touristy area of Almeria, particularly in the summer season.

Shopping lovers can enjoy small shops, as well as several wonderful markets. Grand Plaza is the largest shopping centre in the city. It presents clothing and footwear stores of popular European brands. Those who want to purchase clothes and accessories from popular Spanish brands should take a walk along the main shopping street of Almeria. There are small shops where local clothes and shoes are sold at very attractive prices. Fans of gastronomic tourism should check out the main market of Almeria - Mercado Central. In the vicinity of the city, there are many greenhouses, where vegetables and fruits are grown for export. In the main market of the city, customers can always purchase seasonal vegetables and fruits at the most attractive prices, as well as meat delicacies and dairy products from local farms and dozens of species of fish and other seafood, popular national sweets, as well as fresh pastries are sold. Those who like walking around unusual shops should come by Promesas del Oriente shopping pavilion. The variety of products presented in it is amazing. Here, you can buy colourful oriental carpets and bright hand-made clothes, original silver jewellery, as well as a lot of miniature figurines and hand-made wood carvings.

The Almeria Airport opened February 6, 1968, and it is an important Andalusian air terminal.  It operates with domestic and international flights to some important destinations in Europe. Almeria airport is located 9 km from Almería city centre, in the province of Almería in south-eastern Spain. It is close to the main tourist centres of the province such as the Cabo de Gata-Níjar Natural Park, El Ejido, Mojácar, Roquetas de Mar or Vera.

Costa Blanca is a 200-kilometre stretch of the Mediterranean, famous for its spectacular weather…
01
Jul 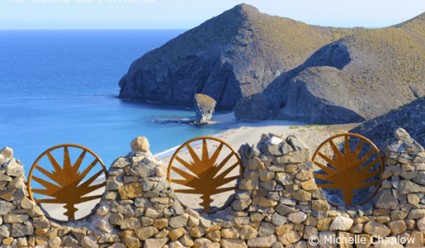 Want to find out more about Costa de Almeria?