Ciudad Jardín, called like the Garden City, is a residential area between the historic centre in the south, and the modern centre in the north. It was created by English residents in the 20th century, where Ciudad Jardín still has a British Club. Because of that, English earned it the nickname: Barrio de Los Ingleses. In the beginning, it has a modern style, and then, in 1940, new buildings with neo-Canarian style were added. Neo-Canaryian is a DIY style built by local architects; they fused architectural features of Canarian houses with contemporary architecture and techniques, such as wooden balconies and stone-detailing.

Ciudad Jardín remains an upmarket property area, although there are some apartments and even condominiums within its limits, it is right in the middle of Las Palmas and a peaceful and beautiful barrio with life going on behind fences and walls.

Although in 1921, after a commission by the city council to put a lot of urban planning into practice for Gran Canaria’s capital, the current neighborhood was reorganized by Architect Miguel Martín Fernández de la Torre The utopia of his artist-brother Nestór, who decided to create a facsimile of a traditional Canarian village in the center of the capital, was brought back to life by Martín Fernandez de La Torre. So was born the town of Canario, home to a museum of art too: Museo Nestór.

On Museo Nestór, the highlight is the round room featuring Nestor’s Poema del Mar; a series of vivid Modernist paintings of monstrous fish-eating sailors during a storm.

The five-star Hotel Santa Catalina is also commissioned by Miguel Martínez Fernández de la Torre. Opening in 1890, has accommodated celebrities The best example of the Neocanarian style is the Pueblo Canario by the Hotel Santa Catalina at the south end of the Garden City. It is festooned with traditional Canarian balconies.

You also can see the Atis Tirma monument which was found in 1981, sculpted by Manuel Bethencourt Santana. Many people mistake it as some sort of Olympic tribute. But, instead is a reference to the descendants of the Amazigh - are an ethnicity of several nations mostly indigenous to North Africa, who occupied the island before the arrival of the Spanish in the 15h century.

In Ciudad Jardín, you’ll find the prettiest park called Parque Doramas. Then there’s the aforementioned Parque Romano, which is a formal garden complete with a lake and waterfall, a children’s play park, lots of beds of subtropical plants and trees, and a pleasant outdoor cafe.

If you have a good look in the lake, you’re gonna see some huge carp and a couple of swans. The little stream at the north edge of the lake is full of tropical fish such as mollies, cichlids, and frogs.

Along with Parque Insular, UD Las Palmas holds many of the city’s architectural treasures as well as the lovely park and a gorgeous art gallery. At first sight, it looks like a residential area. 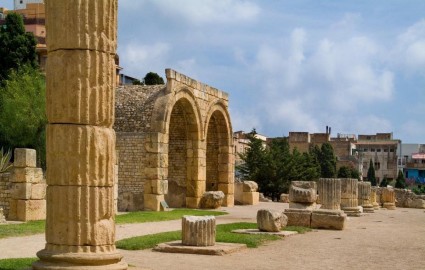