Costa Blanca is a 200-kilometre stretch of the Mediterranean, famous for its spectacular weather and natural landscapes, with amazing Blue Flag white-sand beaches, thanks to their exceptional water quality. This beautiful coastline is located in the province of Alicante and extends from the town of Dénia to Pilar de la Horadada.

There are many advantages of buying property in Costa Blanca. In this article, we break down all the pros and cons of living in Alicante.

Costa Blanca is likely to be the Costa you’ve heard most about, as it’s undoubtedly the best well known. This is where you will find Benidorm, the most famous holiday resort in the world, as well as the city of Alicante with its iconic quayside walk. However, not far from the highrises, you’ll notice that Costa Blanca gives also way to elegant villas, fruit orchards and almond groves.

The pros of living in Alicante:

First and foremost, the climate is one of the main advantages of this area. All the cities and small towns that make up Costa Blanca have a Mediterranean climate, making each place great for living, visiting and a popular tourist attraction.

Spanish locals and foreigners flock to Costa Blanca every summer because of its natural splendour, making the region very crowded during this time of the year. It has become a popular destination and an ideal place for many to purchase their dream home. Some just want to find a second home, while others are searching for permanent residency or even investment opportunities.

In the region of Costa Blanca, you’ll find the highest concentration of ex-pats in the country, gathering 13% of all foreign residents in Spain. Thanks to the large number of UK ex-pats living in the region, you can find plenty of social activities for English speakers, such as chess, bowling and craft clubs, sports teams and fundraising groups for various causes.

The region has just the right balance between the authentic Spanish culture and a solid network of British ex-pats, based on their clubs, societies, golf clubs and newspapers.

Alicante-Elche Airport is one of the busiest airports in Spain and has great connections to the UK and Europe. Additionally, Costa Blanca has a good local transport infrastructure, making it easy to get around the region.

The major cities in Spain, Madrid, Barcelona and Málaga, are equal distances from the main town of the coast of Alicante.

Another of the many advantages of the Alicante region is its food. Costa Blanca’s cuisine benefits from the Mediterranean’s proximity, having mainly seafood and fresh fish at its core. Paella is surely one of the main delicacies you can eat in the region, but there’s also plenty of options for meat-lovers. Above all, you can always find plenty of good wine in every restaurant, which will be the perfect companion to taste all the typical dishes!

The Costa Blanca area is also gifted with several great international schools, which makes the region a perfect overseas hotspot for foreigners that want to start a new life in a new place.

Costa Blanca ex-pats have an array of choices of international schools, including LAUDE, The Lady Elizabeth School in Javea, which it’s known for its excellent reputation since its first opening in 1987. This school caters to children from 18 months to 18 years old, from all nationalities. Courses are taught by native English speakers and Spanish speakers, but with a major focus on English.

Cons of living in Alicante:

The pace of living is something that most ex-pats need to adjust when they arrive in Spain. Along with other Latin European nations, Spain is famous for its slow pace of life, and so for its heavy bureaucracy, namely regarding important business matters. Newbies will have to be prepared for long queues and to fill out a lot of paperwork.

What’s more, Spanish locals and foreigners flock to Costa Blanca every summer because of its natural splendour, making the region very crowded during this time of the year.

High levels of tourism can become somehow overwhelming. One way to overcome this is to search for lesser-known beaches and towns or explore other Spanish coasts where you can escape the crowds and have a more peaceful summer.

Some examples of less-crowded coasts in Spain are:

At the same time, being Costa Blanca one of the regions in Spain with the highest number of foreigners living there, if you’re looking for an authentic Spanish lifestyle, Alicante might not be the best choice. Its popularity among ex-pats and tourists make it difficult for you to find a real local experience. The Costa de Almeria and Costa Brava are better known for providing genuine Spanish typical experiences to those who visit them.

In Costa Blanca, the economy is very seasonal, likewise many of the jobs of this region. However, as there are also many English speakers living there all year round, it is possible to find some job opportunities for foreigners, not only restricted to the usual bar or restaurant work.

Nowadays, what has been most common is to set up a business or work remotely.

Foreign-run businesses, including real estate agencies, beauty salons and shops, are supported by the English-speaking community, which is keen to support businesses that speak its own language. 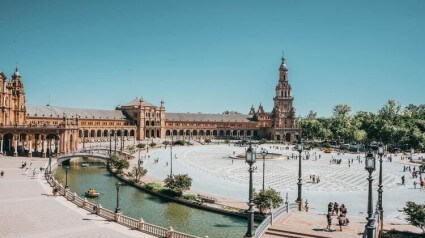 Andalucía rebaja el Impuesto sobre Transmisiones Patrimoniales (ITP) en 2021
The reduction of not only the Property Transfer Tax, but also of the Tax…