Tarragona is an hour from the south of Barcelona and is one of the prettiest cities on the Mediterranean coast. When you arrive, you will be fascinated by the culture and architecture!

Tarragona offers you a walkable tour full of attractions, things to do, and miles of amazing coastline. The beaches are inviting with white and soft sands, hidden coves and blue water almost all year.

You will also notice the wealthy Roman ruins through the city and realize Tarragona was the Roman capital of the Iberian Peninsula.

The city is full of festivals and exhibitions during the year, and the most popular is the building of human towers, in which people literally stack themselves on top of each other in competitions to see who can build the highest structure.

All about the past, Tarragona still cannot hide its reflection in the historical and cultural. The Cathedral is one of the buildings that have to be seen. This is one of the most sublime and spectacular cathedrals, built in the 12th century. With gothic and romanesque features, you can see stone sculptures, ceramics, medieval religious artwork, wooden carvings, and much more.

The archaeological Museum and Necropolis is also an impressive museum even if you are not a museum person. All the pieces here are over 2.000 years old. You can see Roman mosaics, ceramics, coins, clothing, and statues.

Don’t miss the oldest and most elevated part of Tarragona: Part Alta. This area is a mixture of old and new, that includes the Casa Castellarnau, a gothic house from the 15th century that is a museum now.

To take your breath away, you have to sit in the amphitheater, a stone arena occupying a slope between the Roman walls and the sea. It held 15.000 spectators when they used to watch gladiatorial combat or any public execution.

We can not forget about the coastline. It is clean, calm, family-friendly with amenities all around, and many options for outside sports. After a day at the beach, nothing is better than a “foodie” haven. Seafood is one of the best foods in Spain, but besides that, you can also find other dishes supplied for the mountains and valleys of Tarragona.

Tarragona has a lower price than Barcelona and Valencia and for this reason, it is a well-searched area. Discover more about Tarragona here. It is a Mediterranean city, so it also means you will have the chance to experience the great weather all-year-round! 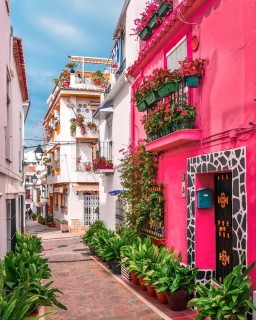